Open Reddit when you’re not used to it and you’ll be met with a wall of ugly text and pages of people arguing over The Last Jedi. It all looks the same and looks pretty daunting – which might be why it’s slept on by a lot of Digital PR experts and agencies, who prefer to find campaign inspiration on Twitter or Google Trends instead. Learn to work with it, however, and you’ve got an endless – and free – resource to help you with your Digital PR strategy.

Reddit is an American news discussion site, formed in 2005. The site is made up of registered users who submit content to the site – in the form of text posts, links and images – which are then voted up or down by members. The more up votes, the more popular the post and the more likely you are to come across it.

These posts are organised into user-created boards known as subreddits. There are a lot of these, about 2.8 million in total and 130,000 active, covering just about every topic on the internet – books, news, politics, science, movies, pets, fitness. If you can think of a subject, there’s going to be a subreddit for it! Reddit sees itself as the front page of the internet and for good reason – chances are if you come across a funny post, article or meme on Facebook, it formed somewhere on Reddit weeks before.

According to Wikipedia, Reddit is the 19th most visited website in the world, and the 7th most visited in the US. Reddit recently revealed their daily active user count to be 52 million and growing all the time and Hubspot found that the site receives an insane 21 billion monthly screen views on top of that.

So, what we’ve got is a site that is enormous, but broken down into very specific sections covering pretty much every niche and vertical. This can vary a lot, but there will be a relevant subreddit for your client, somewhere, even if it’s a small one. This essentially means that the site can be used to focus group targeted ideas and research just about anything.

Pulling together subreddits is a great way to see what kinds of topics are trending within your client’s demographic or field. Let’s say you have a client who sells plants. Google your keyword plus subreddit first, which in this case will be “plant subreddits” or variations of that: 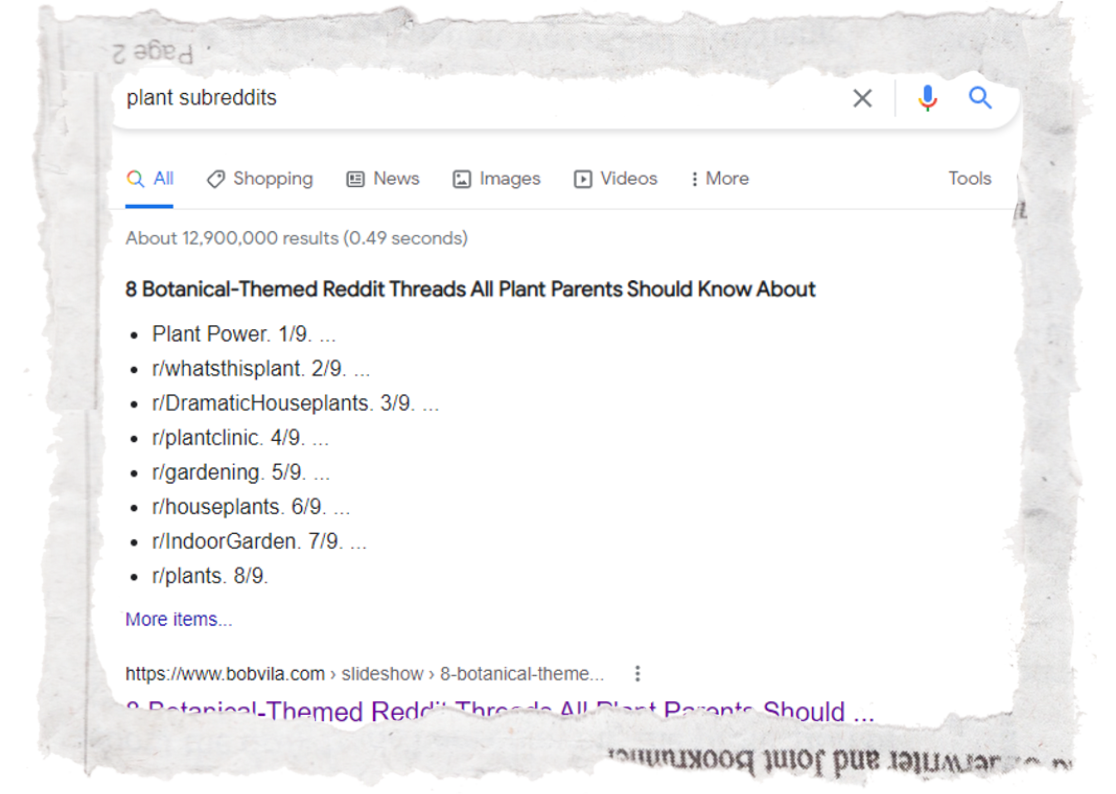 In this case, a very handy blog has pulled together a list of 8 plant-based subreddits for us already – this is a great starting point. And it helps us refine our initial search to do another – this time for “house plant subreddits” – which brings up more to work with, including posts from users also looking for more plant subreddits:

Giving us even more to add to our lists: 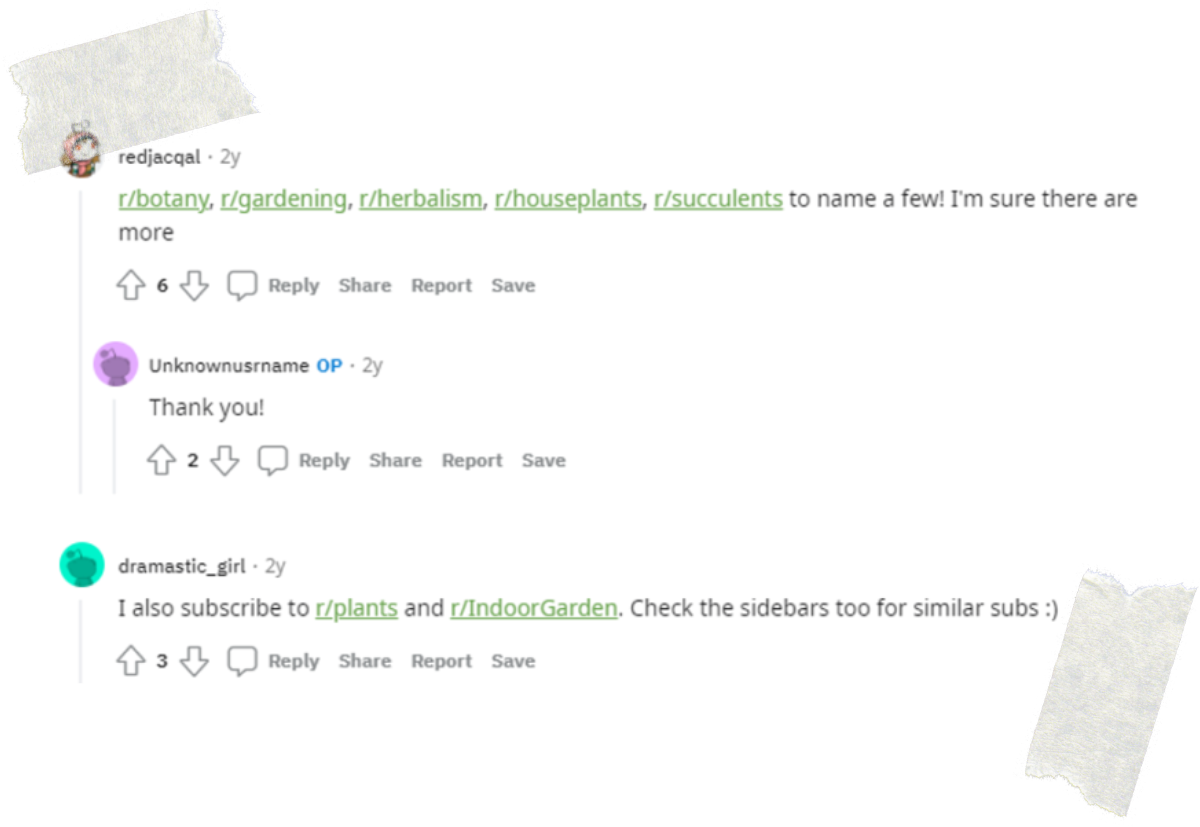 Within 2 minutes and 2 searches, we’ve pulled together 10-15 plant subreddits. This is a great way to get an overview of your clients industry. By searching through these subreddits, you’ll see posts sorted into the most popular, based on upvotes. So you can see at a glance what sort of content is successful online. By filtering results to “new” as well, you should be able to get a headstart on breaking trends.

A quick scan through some of the new posts on these subreddits gives us a wealth of ideas to start with, for example:

Of course, these aren’t fully formed ideas – but you’ve got starting points here backed up by Reddit numbers. You can take these into brainstorming sessions or combine them with common Digital PR campaign styles, i.e. a guide on how long you can go on holiday with certain plants at home, or a calculator on how to troubleshoot common plant problems.

You can also use Reddit as a quick-fire way to pull together a bunch of ideas super fast. This is a handy way to speed-up ideation and a good tool to use before brainstorming sessions with your team.

Collect together a few broad keywords related to your client. So for example, a car insurance client you’d be looking at keywords like: cars, driving, road trips, car insurance and electric vehicles.

Set the toggles to “Top” and “All time” which will bring up the most popular topics on the site and start searching with these keywords. Scan through the lists and pull out anything which has a lot of upvotes, or which just generally looks interesting or unique. Within a pretty short time frame, you should be able to build together a big bank of initial ideas to take into your next brainstorming session.

For example, the second post when we search “car insurance” is on California banning gender in setting car insurance rates: 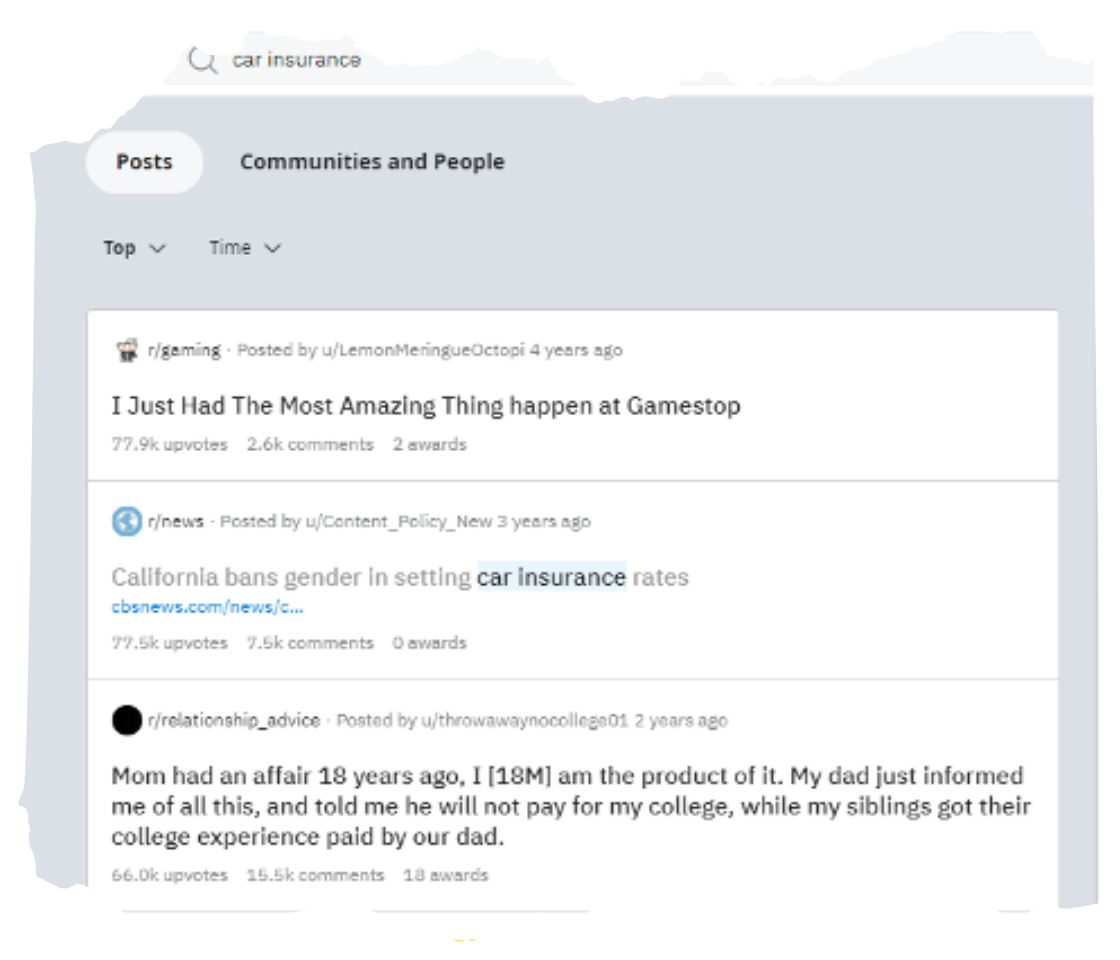 Just from that alone, we can pull out a few stems of ideas:

Reading through the thread itself will highlight other talking points. Within the first few posts we have:

All of which are good starting conversations for Digital PR car insurance ideas.

Searching for another keyword, “road trips” brings up this within the first few posts: 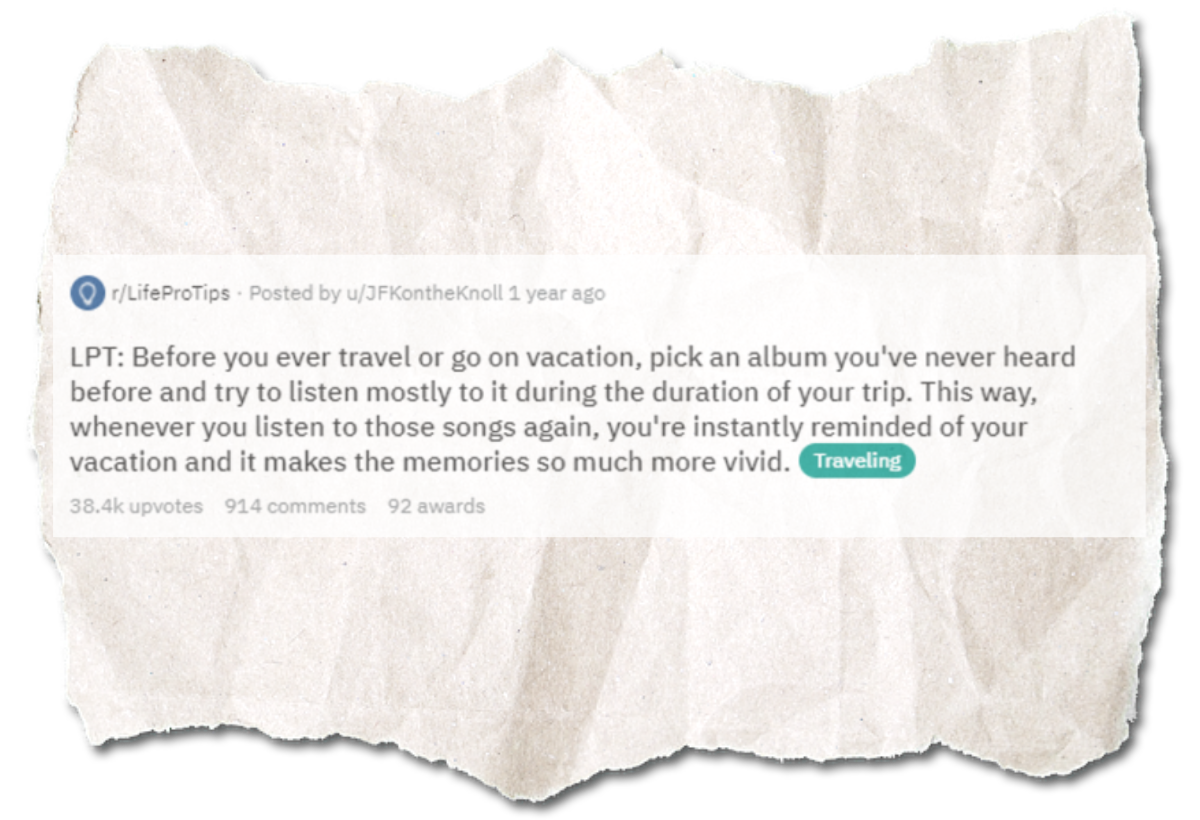 Which itself, inspires a few more threads:

It’s a good way to mine topics, talking points and start building foundations for campaigns and your Digital PR strategy. The trick is not to stress too much at this point about what works – add anything which looks interesting and anything with a ton of upvotes. Come back later and pull out a couple of ideas based on each post. You can build up a big bank of ideas really quickly. Plus, if you ever have difficulties selling ideas to clients, then having the backup of Reddit upvotes behind your ideas can be helpful. You can make a list of this on Excel, noting the keyword used, upvotes and comments.

If you’re brave, you can use Reddit as a focus group for your ideas. There’s a couple of ways to do this. Either drop your guide into a subreddit and say you’re using it for a campaign and ask for feedback, or pretend it’s something you’ve come across online and wanted to share. You’ll need a Reddit account to do this, and it’ll need karma – upvotes from comments – otherwise you’ll look very spammy and get blocked. It helps to set up a Reddit account which focuses on your client’s niche, and build up your profile by posting interesting content every couple of weeks.

Be warned, Reddit can be very harsh and will absolutely tear your content to shreds, more so because it’s so obviously marketing. This isn’t always a bad thing – you’re essentially workshopping your idea with a group of people who are extremely knowledgeable and passionate about the subject, which should put the campaign in better stead when it goes out to journalists. Especially useful if you’re doing a campaign on a topic with a large fandom, Marvel movies, Lord of the Rings, Star Wars etc. But you might need thick skin for some of the comments!

You’re also willingly putting your campaign out into the public before it’s official – a lot of Digital PR experts won’t be keen on this.

A lot of journalists are on Reddit. It’s a bit of a running joke on the site that Buzzfeed journalists set up AskReddit threads and use them to crowdsource content like “these are the UK’s biggest childhood regrets”, “these are the things men wish they’d told their ex.” With that in mind, you might think that posting your campaigns to Reddit is a sure-fire way to get in front of journalists without ever having to email them.

It’s harder to do this than you’d think. A lot of traditional campaign forms – surveys for example – violate Reddit rules, so they’ll get taken down pretty fast. On top of that, most campaigns are going to be hosted on a client’s site or blog. These will be instantly clocked as marketing and removed by moderators, and you might even get banned from posting. Because of this, using Reddit for outreach is never that reliable as a Digital PR strategy.

What you can do, and what works better, is wait until you’ve had your first decent piece of linking coverage, and share that link into the relevant subreddit instead. A link to the Huffington Post or Business Insider will look a lot more legitimate than a blogpost from your client, and if it takes off on-site you’ll get more eyes on your campaign. This means more journalists will come across it and hopefully cover the story themselves.

Ready to jump down the rabbit hole?

Memes and weird conspiracy theories aside, there’s a lot of value in using Reddit as a source. Whether you’re researching data or just looking for inspiration, it’s a way of reaching a different and wider audience. Subreddits are Google friendly, so whatever you might find on Reddit will reflect things people search for and want to know more about.

Digital PR at Dark Horse is all about jumping down the rabbit hole and finding outside the box ideas, campaigns and audiences to develop a Digital PR strategy that works for you. So, if you’re not ready to dive in yourself let our team of SEO masterminds audit your website (for free!) and tell you if Digital PR, and maybe even Reddit, could increase your brand awareness and more importantly – conversion rates.

Give us your email and we will do what every other company does.

Send you two newsletters and sack it off. If you can prove we have sent you 6, you get a free Dark Horse T-Shirt.